WARNING:  This is for true buffs of political – specifically Missouri political – history.

A couple weeks ago I was honored to speak in Arrow Rock, Missouri, an historic village (now of 56 people) above the Missouri River where Louis and Clark crossed it, where the Santa Fe Trail started, where the great American frontier artist George Caleb Bingham lived.  I spoke at the installation of my dear friend Chet Breitwieser as President of the Friends of Arrow Rock, the devoted group of supporters who champion the past in that community and keep it available and relevant to the present.

I argued that Arrow Rock’s experience with citizen statesmen – individuals who served in public office in ADDITION to their private lives, not consumed by their political lives – was not only vital to the existence of a government on the frontier but is a great model for what we need to day.

I hope you find at least some interesting history (highlighted in bold) in the following excerpts from those remarks.
John 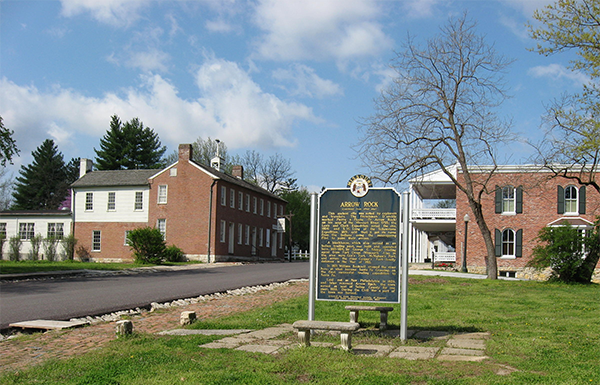 You have heard it said, “When you have a hammer in your hand  everything looks like a nail.”  That is just one way of saying each of us sees the world from our own perspective.

My perspective is politics.  It’s what I’ve done for 50 years.  And when I look at the world through my perspective of politics I believe the history of Arrow Rock offers timely and powerful lessons highly relevant to today.

Indeed, the “Arrow Rock Model of Civic Engagement” may be the ONLY solution to the awful problems we face today.  Those problems ARE awful.  And, make no mistake, they ARE OUR problems; for as it was written by John Donne 400 years ago, “ask not for whom the bell tolls, it tolls for thee.”

Since the start of the last Presidential campaign four years ago, work for my corporate clients has had me in 33 states and I have overseen operations remotely in another nine.  What I have seen in 42 states is deeply troubling.

I see growing insecurity, desperation, drug addiction, fear, intolerance, hatred, and despondency in dying cities and counties from the “Rust Belt” and Appalachia, to the Black Belt of the deep South, to the life-destroying chaos on our Southwest border.

And the once secure middle class is not exempt. Forty-five million Americans owe $1.5 trillion in student loans, more than many of them can pay. A report out last week told the story of college students choosing between eating and pay tuition.

For too long Washington — now long on profile and short on courage — has been little more than a “dumpster fire,” caught in mean-spirited political gameplaying, woefully unwilling and incapable of constructively addressing critical domestic issues of immigration, healthcare, trade and tariffs, education and the environment, and natural disasters, let alone Russia, China, North Korea, the Middle East, Africa and Latin America.

Why look for a solution in Arrow Rock?

Look around.  This audience is representative of a civil society of caring, charitable, constructive people . . . givers, not takers, concerned about what’s good for everyone.  There are disagreements – about policy, but never principals – among neighbors seeking common solutions, among fellow citizens carrying their burden of self-government.

How different that is from Washington . . . and 50 state capitals where our fate is in the hands of today’s breed of professional politicians.

And that’s the profound – and vitally needed – historic lesson Arrow Rock teaches:  the role of the involved, engaged citizen willing to carry the burden of selfless public service.

Go back nearly 200 years, when Missouri’s admission to the Union was, in President Jefferson’s words, a “firebell in the night.”

Arrow Rock then was a small emerging village on the edge of the western migration.  The few people who lived here HAD to be involved, had to serve in public office, or there would have been no government.

It had to be a government “of the people” or there would have been no government at all.

Public service is what leading families did in those days.  Mrs. Sappington’s family, the Breathitts, gave Kentucky two governors, a lieutenant governor, an attorney general and, most recently a state and federal public utility commissioner.

Just down the road from Arrow Rock back in the early and mid-1800’s lived Missouri’s famous Supreme Court Justice William Barclay Napton.

And of course, we’ve already mentioned one of America’s most famous artists, George Caleb Bingham . . . who, in addition to his extraordinary skills with canvass and brush, still found time to serve his state as state representative (coming back to beat E.D. Sap-pington in the next election), state treasurer AND adjutant general.
That’s the Arrow Rock Model of Civic Engagement . . . like Cincinnatus, who left his plow to lead ancient Rome to victory over the Aequi and then returned to his farm.
These men served not because it was easy but because it was vital.  In those years leading to Civil War it was terribly hard,             and took an enormous toll, as brothers opposed brothers.  But it was their sacred duty.  Citizenship meant service.
They weren’t always successful — Bingham did not get to Congress, nor the consul positions he wanted, while Gov. Jackson died in Arkansas, retreating from Union troops, forced from the state that elected him governor — but they were faithful to their beliefs and to their belief in public service.

And Saline County continued the Arrow Rock model through the centuries . . .

That’s what America needs.  People (as the late Eric Sevareid once said) who aren’t interested in BEING something, but in DOING something . . . in doing something as public servants.

What Missouri needs, what America needs, what the world needs is a return to the Arrow Rock Model of Civic Engagement.

Professor Paul Nagle closes his wonderful book on with a tribute to George Caleb Bingham, “We ought to remember he gave much of his energy to working to make Missouri a better place to live.” Ah, if that could only be said of all of us.

The State of Politics: Heading Toward 2020

Get the latest news from our team straight to your inbox.